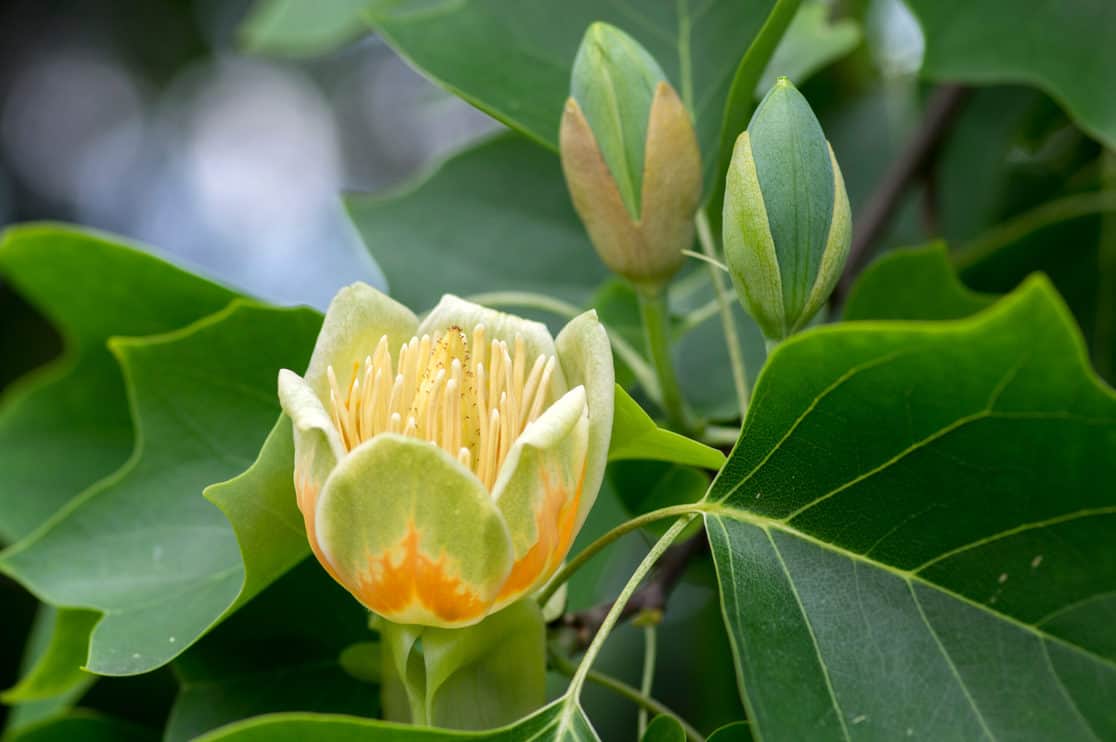 Tulip trees are beautiful, large trees, with gorgeous blooms. They are commonly referred to as yellow poplar and white wood trees. But there is some controversy on if tulip trees are hardwood or softwood trees.

Tulip trees are hardwood trees because they have lobed shaped leaves and dry fruit. This leads tulip trees to being classified as angiosperms or flowering trees, which is why they fall into the hardwood category. Softwood trees are generally coniferous trees that bear pine cones or needles.

If you’ve ever seen a tulip tree flower, you’ll know it bears resemblance to a magnolia tree in bloom. Let’s get into the details as to why tulip trees are hardwoods and not softwoods.

What Is A Tulip Tree?

The tulip tree, Liriodendron tulipifera, is also known as yellow-poplar, whitewood, and tulip poplar. Despite their name, tulip trees are part of the magnolia family and not a poplar. It is native to North America and has beautiful yellow blooms that resemble tulip flowers, it is also one of the largest native trees.

The tulip tree is deciduous, meaning that it loses its leaves in the fall. The seeds are held in a cone-shaped casing, which sits upright on the branches. This seed casing is called a samara, which is just a dry fruit that bears seeds, specifically winged seeds.

It grows between 70-90 feet tall and 30-50 feet wide and has a fast growth rate with more than two feet of growth per year!

Additionally, this tree provides food in fall and winter for mammals and birds, and nectar in spring for hummingbirds.

What Is A Hardwood Tree?

So, what exactly is a hardwood tree? What does that even mean?

A hardwood tree is a flowering, fruiting tree, or nut-bearing tree, also referred to as angiosperms. Angiosperms are the scientific classification of flowering plants that produce seeds enclosed in fruit.

Hardwood trees are found in temperate and tropical forests and can be both deciduous (in the temperate regions) and evergreen (in the tropical regions). An angiosperm tree is also a broad-leaved tree, unlike conifers, which have needle-like leaves.

The broadleaf tree is a characterization of the group of trees that lose their leaves in the fall. These trees have leaves just like the name says and are flat leaves.

Additionally, hardwood trees are not always considered to have harder wood. They can be softer wood than some softwoods.

When trying to determine if a tree is a hardwood or softwood tree, we can look at a cross-section to help determine this.

For more of a helping hand in hardwood tree identification, consider getting a field guide such as the Trees of The Central Hardwood Forest, or the Sibley Guide To Trees!

Hardwoods have wood that is porous and contains vessels. The vessel element within the wood contains the xylem, which is responsible for transporting water throughout the tree.

The pores within the xylem are found in angiosperms but are lacking in gymnosperms, which makes it a distinguishing characteristic between hardwoods and softwoods.

Hardwoods are used for things like tools, constructions, boats, furniture, and flooring. Because it is an extremely dense wood, it is hard to work with, resulting in its use in flooring and furniture.

Hardwoods include oaks, maples, walnuts, and cherries, all of which are broad-leaf trees that don’t contain cones or needle-like leaves.

You can determine that a tree is a hardwood and the species of hardwood tree based on their growth ring pore arrangement, which examines the size, distribution, and changes in the number of pores within a growth ring between earlywood and latewood.

Hardwoods are classified into three groups based on their pore arrangement, unlike softwood.

The following hardwood classifications help determine the species of tree:

You can learn more about hardwood trees in our article 10 Silver Oak Tree Uses (And What To Do With Yours)!

What Is A Softwood Tree?

As we said, the name softwood has nothing to do with the hardness or strength of the wood. So softwoods are anything but soft!

When compared to hardwoods, softwoods on the other hand are gymnosperms, which have unenclosed seeds. Gymnosperms are conifers, meaning they are cone-bearing plants. Softwood trees also have evergreen leaves, which are made up of needles or scale-like leaves.

Softwood trees are the source of 80% of the world’s timber used in construction and are also used for paper products. Softwood is also used for roofing, framing, furniture, doors, and windows because it is lighter in weight than hardwood. Softwood, when compared to hardwood, is also much easier to work with, which explains its various uses in windows and doors.

Softwoods include trees that we know to have needle-like leaves and cones. This includes trees like pines, firs, hemlocks, spruces, and cedars.

Softwoods lack the vessel elements of pores and instead have what is called resin canals. Resin canals are ducts that produce resin to serve as a defense mechanism to insects.

Aside from the bad taste of resin to insects, resin canals allow the resin to seep out and form a protective barrier to a damaged or attacked area of a tree. The resin forms a scab-like covering on these damaged areas.

These resin canals can look very similar to pores that are found in hardwood, so it can be hard to determine if a tree is softwood or hardwood based on this. However, resin canals are generally much smaller and can be seen in cross-sections of the trunk. These resin canals, unlike pores, are oftentimes found in the latewood of the growth ring instead of throughout.

Additionally, resin canals are not always present in softwoods. So you may not see any resin canals if the species is a fir, hemlock, cedar, redwood, bald cypress, or a yew. Softwood species that contain resin canals are pine, spruce, larch, and Douglas fir.

Like pores found in hardwood, resin canals are separated by size, from small to large resin canals that can help determine the species of softwood tree.

All of the Pinus genus pine tree species, for example, have large resin canals. Spruce, larch, and Douglas fir on the other hand have small infrequent resin canals. And species like cedar, fir, hemlock, juniper, and yew lack resin canals.

Also, softwoods have what are called tracheids, which can be used to determine the softwood species. Tracheids are measured by diameter and rated by their transition between earlywood and softwood.

If you are trying to grow a healthy softwood tree of your very own, consider getting some great equipment such as this AeroGarden Liquid Fertilizer, or this THANOS Tree Trimmer!

Is A Tulip Tree Hardwood Or Softwood?

Now that we’ve gone over the differences between hardwoods and softwoods, and exactly what a tulip tree is, let’s get into the question of the day: is a tulip tree hardwood or softwood?

What do you think it is? If you guessed hardwood, you’d be right!

The tulip tree has all the characteristic features of hardwood, the first being an angiosperm or flowering tree. The tulip tree bears large, yellow, and orange tulip-shaped flowers in the springtime.

And like we just covered, tulip trees have a dry fruit, a samara, that covers and bears seeds, unlike that of a softwood, which has ‘naked’ or unenclosed seeds.

Next, the tulip tree has four-lobed leaves, and not needle-like leaves, which distinguish the hardwoods from the softwoods.

Lastly, tulip trees contain pores within their wood, unlike softwoods which lack these pores.

If you want to make sure you can take care of your tulip trees, the Fiskars Chain Drive 7–16 Foot Extendable Pole Saw & Pruner is perfect for this! It is extendable to 16 feet so you can prune those high-up branches on your trees. You can also prune those branches that are 1.25 inches thick with this pole saw!

That’s all we have for today on just why tulip trees are hardwoods and not softwoods.

Let’s recap what we covered in this article, like the differences between hardwoods and softwoods and why tulip trees are hardwoods.

The tulip tree is deciduous, which means it loses its leaves in the fall. The seeds are contained in a casing, called a samara, which is just a dry fruit that bears seeds, unlike that of softwoods, which have ‘naked’ or unenclosed seeds.

Softwood trees lack pores in the xylem. Instead, they contain tracheids, which are responsible for water transport. Additionally, softwoods also contain resin canals, which are lacking in hardwoods.

Now knowing the difference between hardwoods and softwoods, it makes sense what trees are considered softwoods, like pines, and spruces. As we know that they contain resin canals, and are also needle, and cone-bearing.

Thanks for sticking around and learning why tulip trees are hardwoods and not softwoods!

If you want to learn more about hardwood trees, check out our article 4 Maple Trees That Produce The Most Helicopter Seeds!

Busing, R. T. (1995). Disturbance and the population dynamics of Liriodendron tulipifera: simulations with a spatial model of forest succession. Journal of Ecology, 45-53. 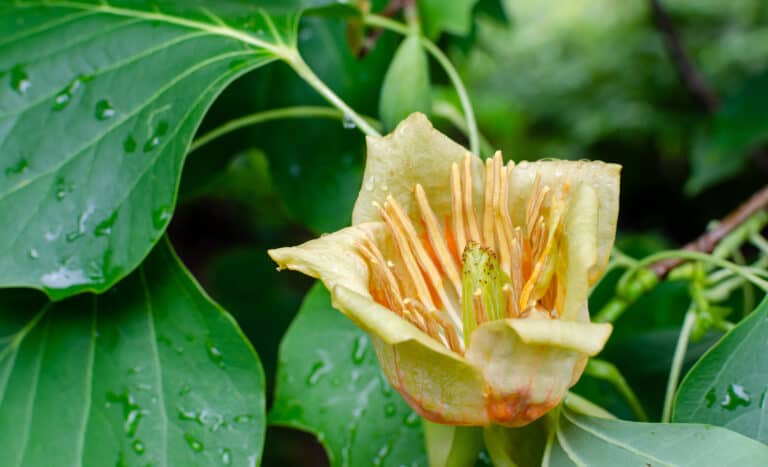 A tulip tree (sometimes called a yellow poplar or tulip poplar) can make a tall and beautiful addition to any garden. With proper care, this… 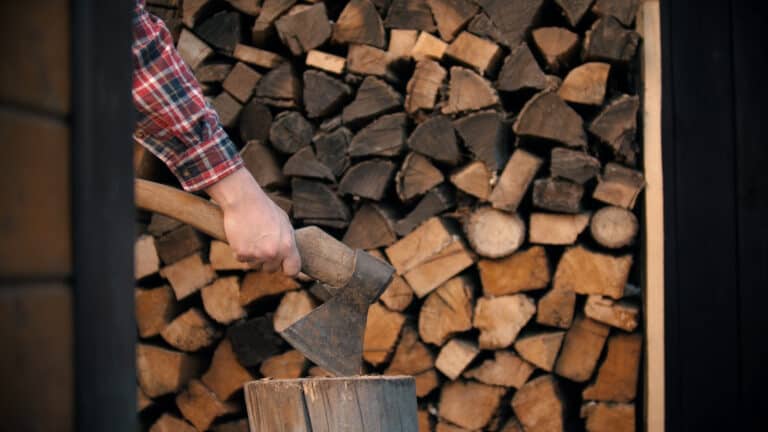 Cutting down trees for firewood can be both rewarding and challenging. But what about that dead tree in your path? Can you process it into… 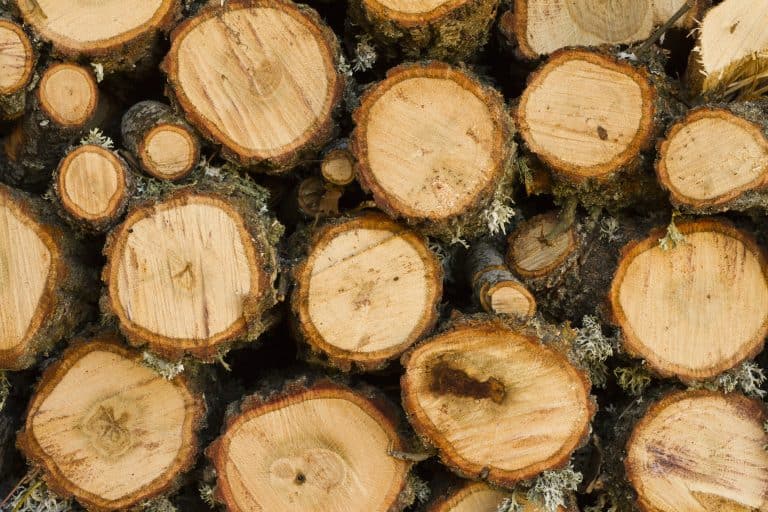 Grab your marshmallows – because there is nothing better than relaxing by a toasty fire. Whether it’s by a campfire or by a fireplace, sitting by… 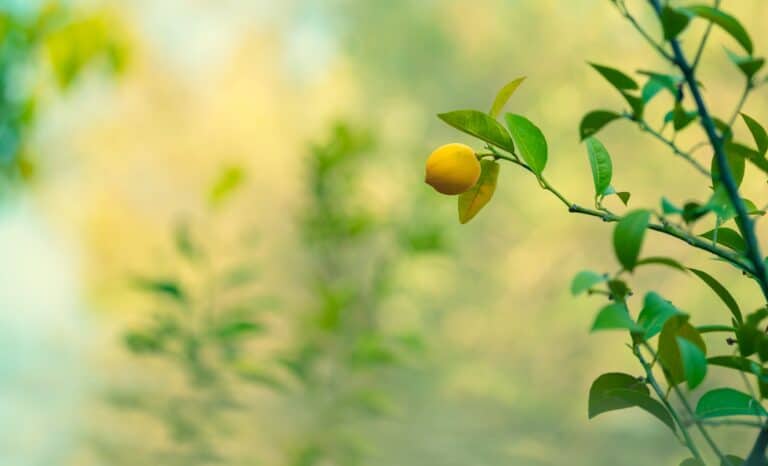 Lemon trees are an amazing addition to any yard where there’s plenty of sunshine and warm weather. Those fortunate enough to live where lemon trees… 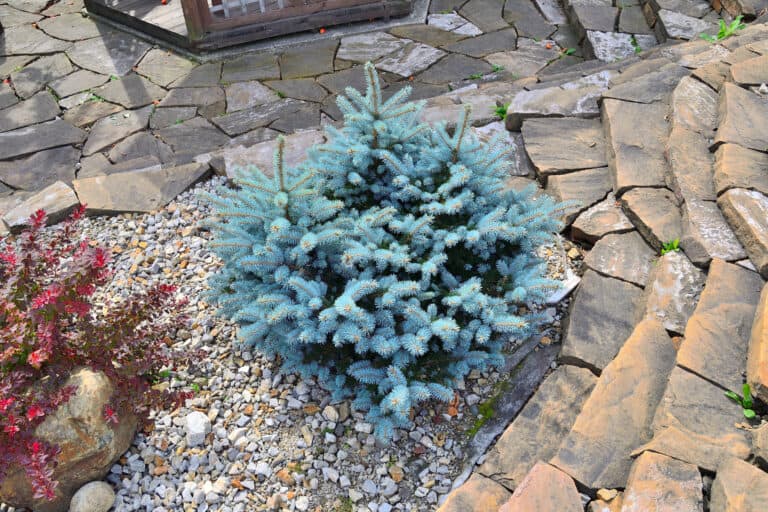 In recent times, the idea of smaller trees has gotten more and more popular. With this, most trees prefer to grow very large if they… 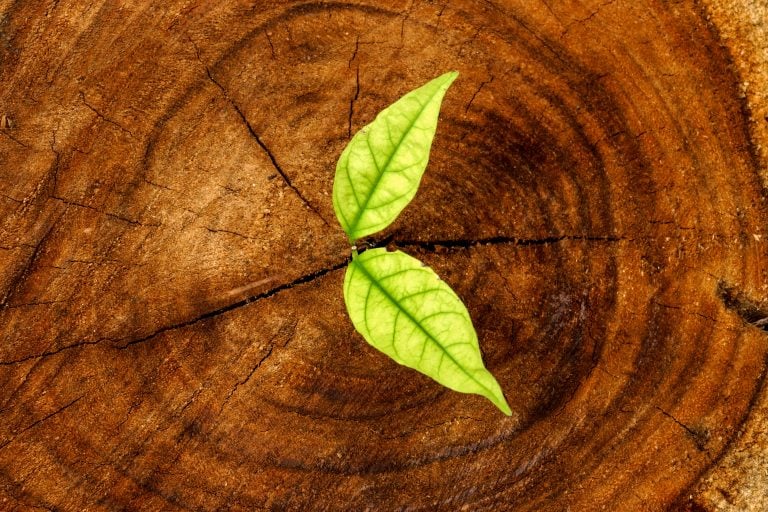 Let’s be real here for a second, uprooted roots, stumps, and roots that are just the residue of a falling tree need to go. Oftentimes,…